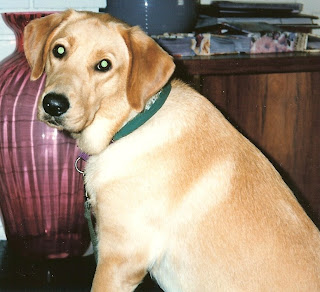 Misty and I had fun today at the Celebrity Read program at the Cleveland Street School in Orange, NJ. We were among such notables as New Jersey Assemblywoman Mila Jasey. When we arrived, Misty was greeted as an old friend, since this was her third visit to the school. Since she is a retired therapy dog, she’s comfortable visiting various institutions and she handled well the crowds of children who wanted to pet her.

We read to three classes. The first was a kindergarten class. I told them about my books and Misty, and explained that she was a Seeing Eye puppy who did not make the program. We read a book titled, The End by David LaRochelle. The book is very funny, and tells the story backwards, from the prince falling in love with the princess who saved him by putting out the fire in his beard back to the when the princess decided to make lemonade. Each amusing event, which included a giant tomato and dragon afraid of bunnies, is stated, then, after the page is turned, the cause of the event is revealed, and so on, back to the beginning. The children enjoyed the book so much, they asked me to read it again in the other direction, and it was just as much fun. After that, the children asked questions about Misty and came to meet her, before reading her a group story about, appropriately enough, ten puppies.

The second class was in second grade. I read a story called Bean Thirteen, by Matthew McElligott, about a superstitious bug that was afraid of the number thirteen. The book is actually a really cute look at the properties of the prime number. The teacher might not have planned to discuss that just yet, but the kids were interested.

We read to a third grade class as our last visit of the day. I read a story called The Old Dog, which was from a book titled Yo, Aesop!: Get a Load of these Fables, by Paul Rosenthal. It modernizes some of the old fables using more commonly recognizable situations. The discussion of writing that the children started went well. They knew a lot more about writing than I did at their age. They asked insightful questions about Misty and my writing.

But the best part was when I offered them my website address. Every pencil in the class was raised immediately. I never saw so much interest.