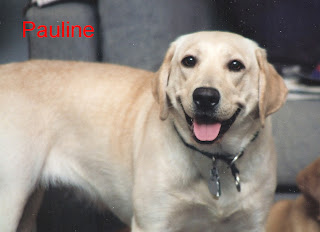 We have been fostering Seeing Eye® puppies for almost 15 years. Almost all have been Labrador retrievers, with the exception of two, who were Lab/Golden crosses. The eleven dogs (which may sound like a lot of work, but it’s easier than, say, having octuplets) were all as different as they were similar.

Two were diametrically opposite. Pauline, dog number five, was a yellow Labrador retriever whom we nicknamed Paulinidini, since she was so much like Houdini. She could get out of anything, a triple-locked crate, a house . . . . Just ask the local police about her. One summer night she walked out the back door while my husband and I were walking our two other dogs. Someone who shall remain nameless did not notice her absence. Apparently she was following us when a kind soul picked her up and brought her to the police station. They looked at her tags and called Seeing Eye, who called and asked if we knew where our puppy was. We looked under the desk where we thought she was sleeping. No puppy. It was mighty embarrassing to have to bail Pauline out after her vanishing act.

On the other hand, Wilda Scisssorlips, our current, black Labrador retriever puppy, has managed to lock herself into rooms, notably the powder room in our house. Because she sometimes wears her leash around the house, and it is knotted in several places, if Wilda walks into the bathroom, which has a door that opens out, the knot will catch under the door and as she goes in will pull the door shut behind her. Then she has to wait until someone sees the leash sticking out from under the door. The few moments of panic at finding her missing (talk about a locked-door mystery) have not involved the police, so far.

They do have a few things is common. They are the kind of puppies who keep people busy, just trying to keep them out of trouble, and they are the most comical, which somehow makes up for a lot of their antics.
Posted by Joani Ascher at 1:47 PM