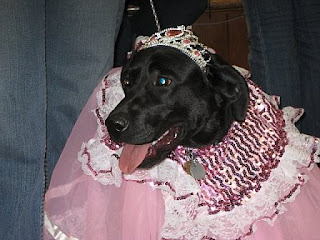 So much has happened since I last blogged. First, there was the Seeing Eye Puppy Halloween party, which Wilda attended dressed as a princess. Then there were all those holidays. During that time Wilda acquired several new personality traits. She perfected her sharklike behavior, cruising under the table and surfacing only to snatch something and drag it under. She has unstuffed all the toys in the house and is currently working on the dog bed which somehow got too close to her crate. She has shredded it as well as the towel inside the crate, ripping it as neatly as if she had started the tear with scissors. For that reason I have taken to calling her Wilda Scissorlips. She would be great in a disaster, as she could make bandage strips out of any fabric. She also regards herself as some sort of rock star, refusing to go anywhere without her entourage. If she needs to go out, she’ll round up the other dogs to accompany her. She is also perfecting her skills as a pickpocket. Most recently she developed her latest trick--walking upstairs backwards. In short, she keeps me very busy. And on top of that, I'm getting ready for the launch of my new book, Vengeance Runs Cold, which is coming out February 24th.
Posted by Joani Ascher at 6:41 PM